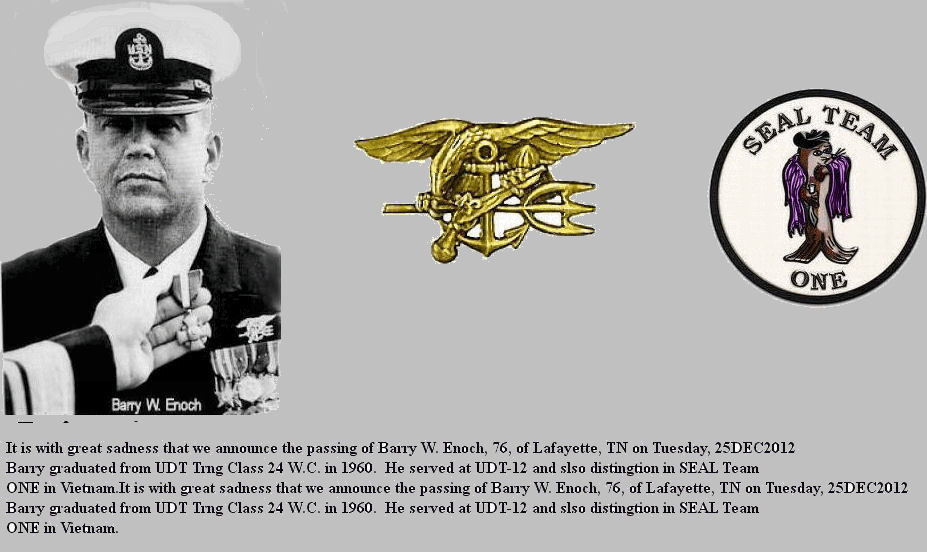 The President of the United States of America takes pleasure in presenting the Navy Cross to Chief Gunner's Mate Barry W. Enoch, United States Navy, for extraordinary heroism on 9 April 1970 in connection with operations against enemy forces in the Republic of Vietnam.

While serving with a detachment of Sea-Air-Land Team ONE (SEAL-1), Chief Petty Officer Enoch was the Senior Advisor and radioman/grenadier to a combined United States Vietnamese SEAL combat patrol against the Viet Cong infrastructure leaders in Long Phu District, Ba Xuyen Province.

After insertion and patrolling to the target area, Chief Petty Officer Enoch observed six armed Viet Cong attempting to evade. Rushing forward and exposing himself to hostile fire, he succeeded in accounting for three enemy casualties. The SEALs then came under intense B-40 rocket and automatic weapon fire. Realizing that his small force was surrounded, Chief Petty Officer Enoch deployed his men in a defensive perimeter, and although under intense fire, continually shifted position to more effectively employ his weapon, relocate his men, and survey the enemy's locations and tactics.

Although his radio was damaged by enemy fire, Chief Petty Officer Enoch directed fixed-wing and helicopter air strikes on the enemy's positions, some strikes as close as twenty meters to his position. With his men running low on ammunition and still encircled, Chief Petty Officer Enoch directed air strikes on the shortest route between his position and the river, and then led the patrol through the enemy encirclement before the latter could close the gap caused by the air strikes.

By his heroic and decisive efforts in the face of almost overwhelming odds, Chief Petty Officer Enoch was directly responsible for the safe extraction of the patrol members and upheld the highest traditions of the United States Naval Service. 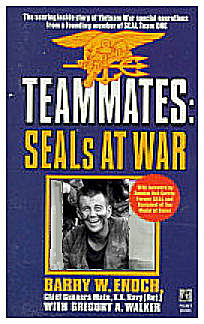 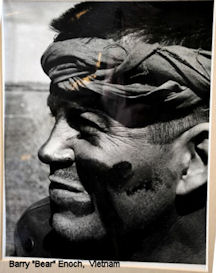 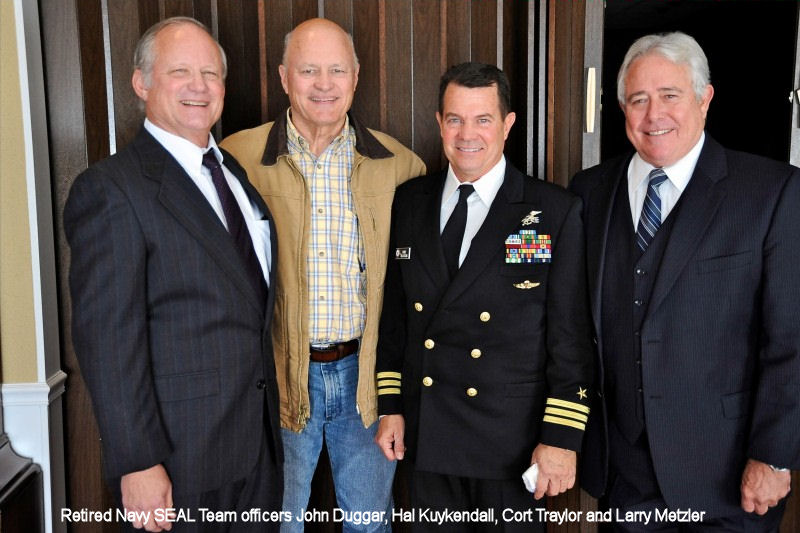 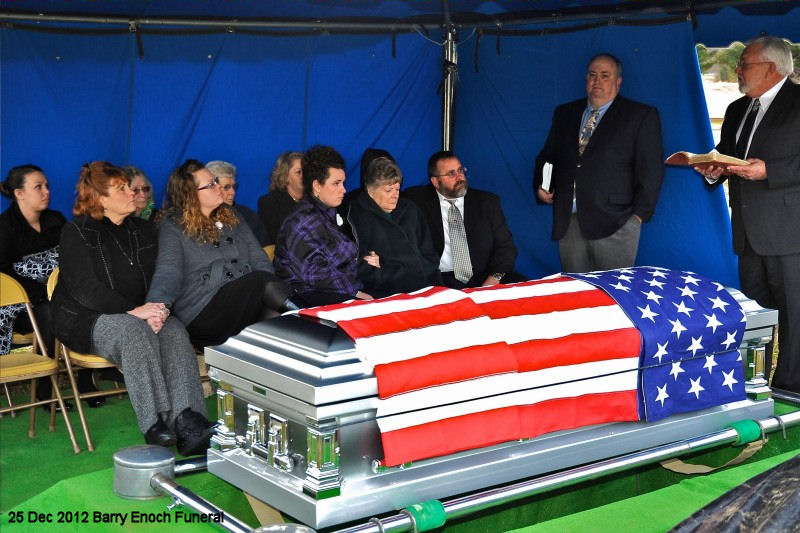 DURING THE PERIOD OF 1973 TO 1976 I WAS THE CHIEF RECRUITER FOR NRD PORTLAND,OREGON AND HAD THE HONOR OF SERVING ONCE AGAIN WITH BARRY, THE SOUTHERN ZONE SUPERVISOR. BARRY AND I BOTH SERVED IN ST-1, BUT IN DIFFERENT PLATOONS. AS PLANK OWNERS OF ST-1 BARRY AND I MAY HAVE BEEN IN NAM AT THE SAME TIME, BUT IN DIFFERENT LOCATIONS AND POSITIONS. OUR PATHS CROSSED MANY TIME IN MY 11 YEARS WITH THE TEAM BUT SELDOM DID WE MEET.

BARRY WAS ASSIGNED AS SOUTHERN ZONE SUPERVISOR WHEN I REPORTED ON BOARD NRD PORTLAND IN JUNE OF 1973. AS THE NEW CHIEF RECRUITER I SCHEDULED A ZONE SUPERVISOR CONFERENCE AT H.Q. AND BECAME REACQUAINTED WITH BARRY AND HIS LOVELY BRIDE LOLETA.

IT WAS BARRY’S LEADERSHIP SKILLS THAT MADE THE SOUTHERN ZONE THE ONE TO BEAT ON MAKING AND MANY TIMES EXCEEDING ALL ASSIGNED RECRUITING GOALS. THAT WAS EXCEPTIONAL BECAUSE OF THE 5 ZONES COVERING THREE STATES SOUTHERN ZONE EXCELLED. BARRY UNDERSTOOD THE EFFECTIVENESS OF DELEGATING RESPONSIBILITY AND THE ART PRAISING IN PUBLIC AND REPRIMANDING IN PRIVATE.

THE RANKS OF ST-1 PLANK OWNERS ARE DWINDLING AND AS A UNIT WE LOOK FORWARD TO THE DAY WHEN ONCE AGAIN WE CROSS PATHS WITH THOSE GONE BEFORE US. LIFE BEGINS AS A SUNRISE AND ENDS AS A SUNSET. IT IS WHAT WE DO IN-BETWEEN THAT ESTABLISHES OUR STATUS AS A WARRIOR.

I am sure the Bear is guarding the streets with a Stoner and catching up on old stories with his Brother and Team Mate, Bill Machen .

One of the swimming instructors from Buds that was Dick Allen's Partner during Bears time is my shipmate Carl Fletcher, although like me, not a team guy Carl has a warm spot for all the UDT/SEAL Guys; especially those he helped make it over the hump. Bear can also watch the Wooden Butterflies on San Clemente Island over at Northwest Harbor. God Bless Him and may he be at rest.

We have lost another SEAL ICON---Barry was the epitome of A SEAL WARRIOR---He was a Plank Owner of SEAL TEAM ONE,, Later an instructor, and also was on the raid the Bob Kerrey received the MOH---Barry had a son in the Special Forces. A GREAT LOSS –RIP Franklin 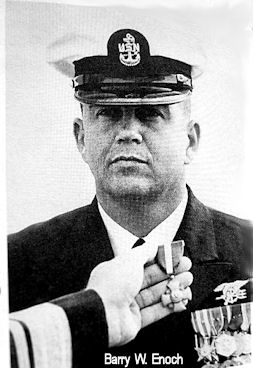 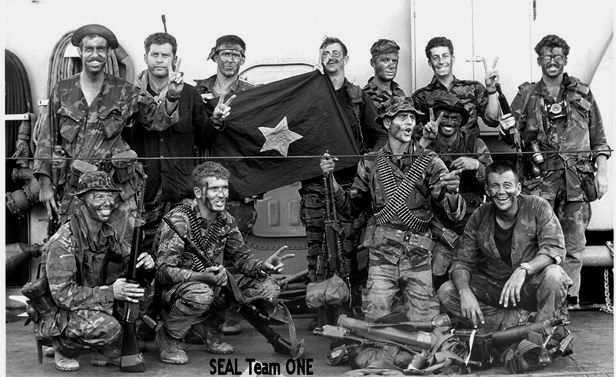 Let me begin by saying that I love your website and it is an honor to address you. I feel a little out of my league in addressing you as I have read of your bravery and dedication in several accounts concerning your interactions with Seal Teams. I have never served in the military, though my father fought and was wounded in the Aleutians in WW 2, and 2 of my older brothers served in the fleet.

So I mean you nothing but respect and honor. Welcome home. I read on one of your pages that you were trying to identify the members of the now famous "Dirty Dozen" photo as to who was who.

In Barry Enoch's book he identifies the team as follows:

Bud Gardner is the person kneeling with an M-60 next to Barry Enoch
John Ware is behind David Wilson.

This is as far as I have been able to ascertain so far. I know that several of the team have written to you, and as you all seem to share such a close nit brotherhood,

I may actually be providing what little I know much too late. Thanks again for your career, and I have no idea, but I hope this little helps. 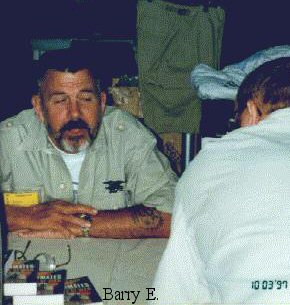 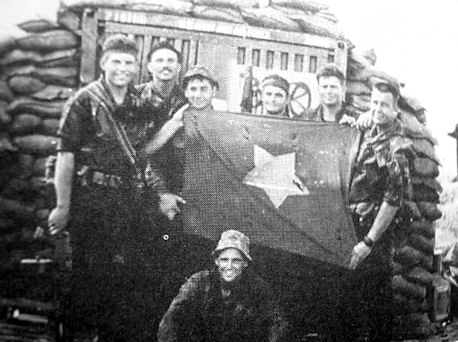 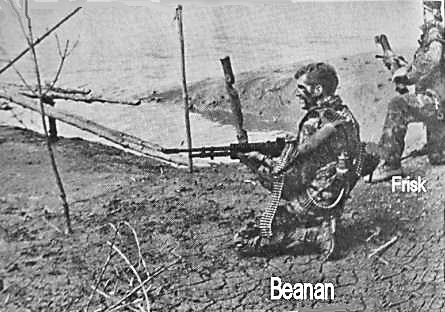 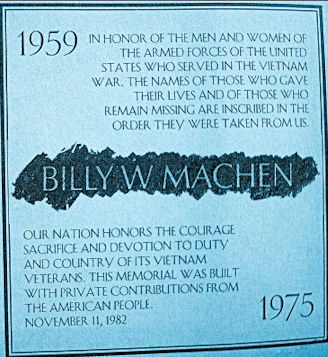 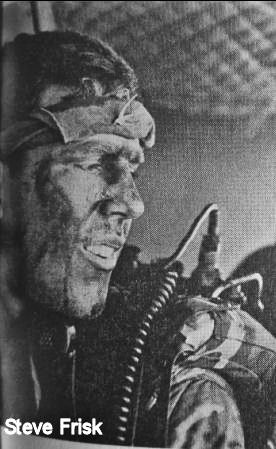 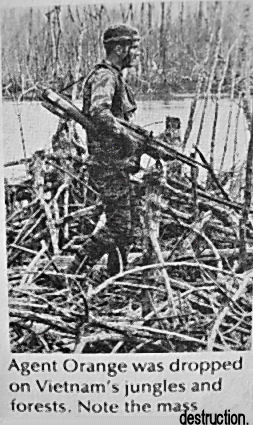 WEBMASTER NOTE: I would like to label all these photos with the SEALs names, somebody out there from SEAL Team ONE, 'nam war games please help me.    Doc Riojas 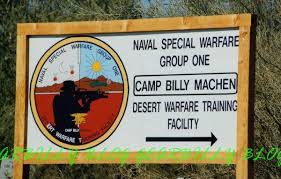 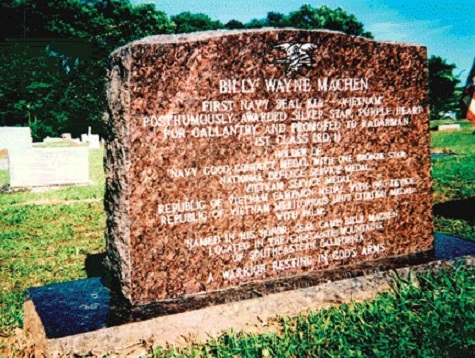 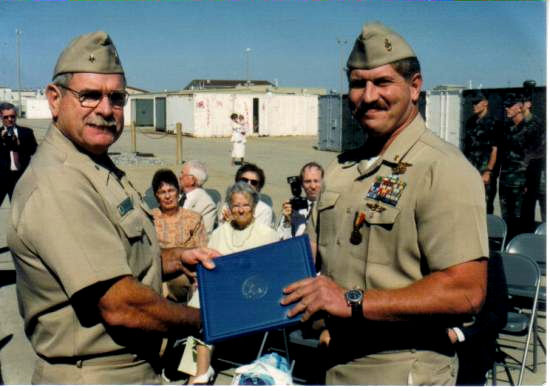 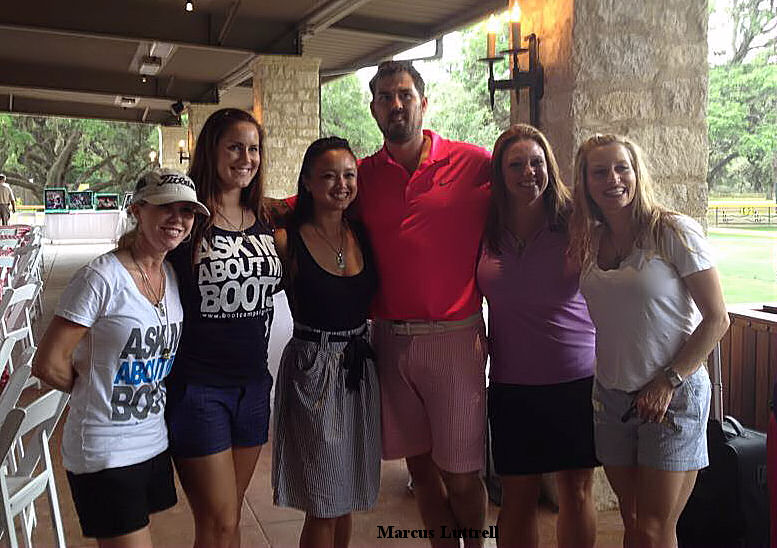 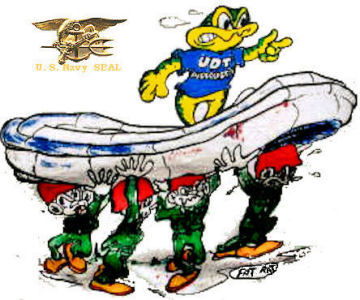 Norfolk VA. -
Jack Neal Reynolds, 87, passed away proudly served his country in the United
States Navy, serving in WWII and and the
Korean Conflict. While in the Navy he
served on UDT teams 2 and 21. After
retiring from the Navy, Jack began a career
with North Ship Co., where he retired
after 15 years. 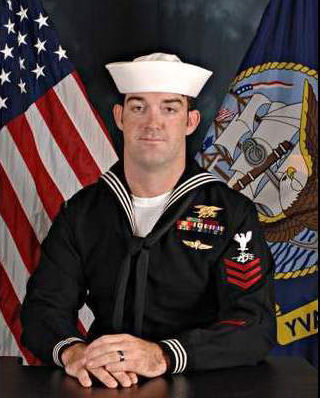 Feeks grew up wanting to be a Navy SEAL. He enlisted in the Navy in 2006 and then completed Basic Underwater Demolition/SEAL training and advanced training. He served with a West Coast-based SEALunit beginning in May 2008. After serving two tours of duty in Iraq, Feeks was deployed to Afghanistan in December.

The Sunday beforehe was killed, he sent an email to his family saying he felt like he was doing what he was supposed to do, his father, Thomas said. When Feeks? family got the news that he had been killed in a helicopter crash, they were devastated. But they knew the risks their son was taking, Virginia said. ?We all knew thiscould happen,? she said. Feeks was an avid reader, bicyclist and triathlete. He also had an interest in guns.

He left behind a wife, Emily, his parents and sister, Regina, who is in the Navy.

Tom Feeks
This email was cleaned by emailStripper, available for free from http://www.papercut.biz/emailStripper.htm 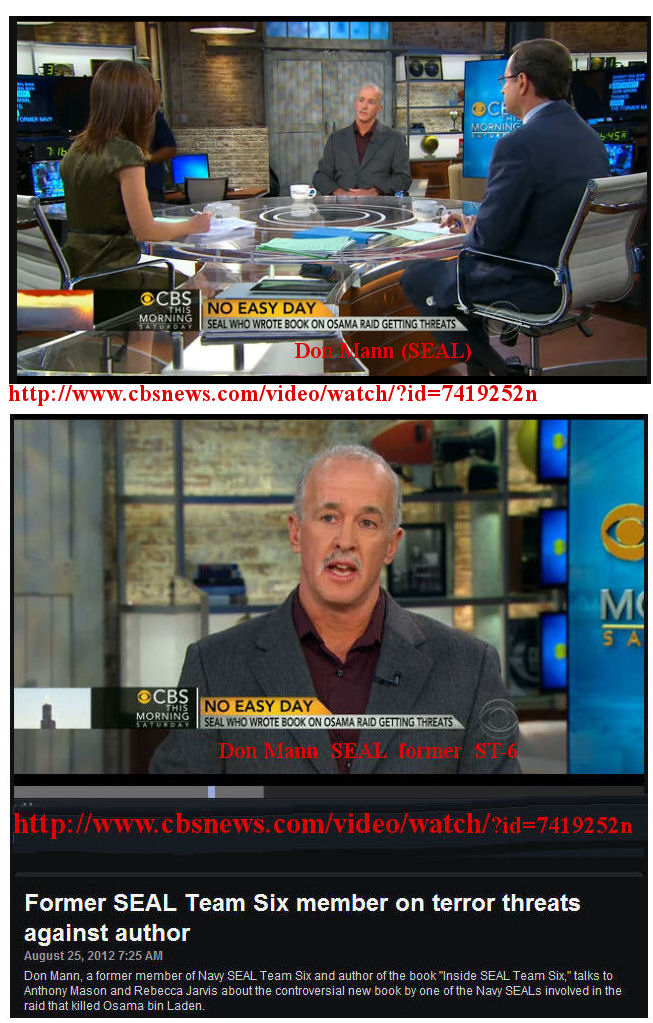 Osama Bin Laden was killed within 90 seconds of the US Navy Seals landing in his compound and not after a protracted gun battle, according to the first account by the men who carried out the raid. The operation was so clinical that only 12 bullets were fired. The Seals have spoken out because they were angered at the version given by politicians, which they see as portraying them as cold-blooded murderers on a kill mission. They were also shocked that PresidentBarack 0bama announced Bin Laden's death on television the same evening, rendering useless much of the intelligence they had seized.

Chuck Pfarrer, a former commander of Seal Team 6, which conducted the operation, has interviewed many of those who took part for a book, Seal Target Geronimo, to be published in the US this week.