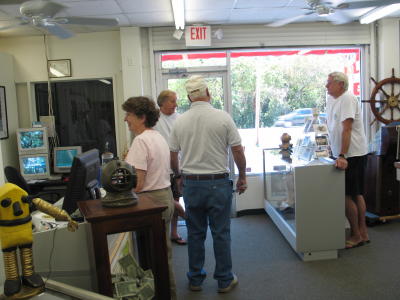 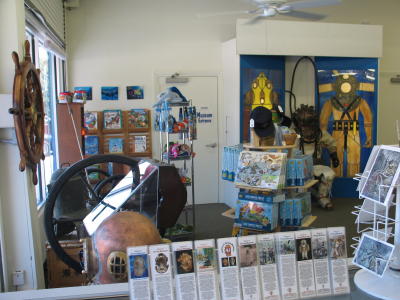 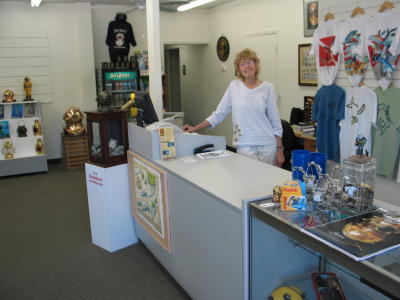 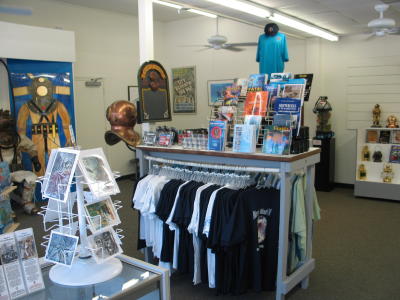 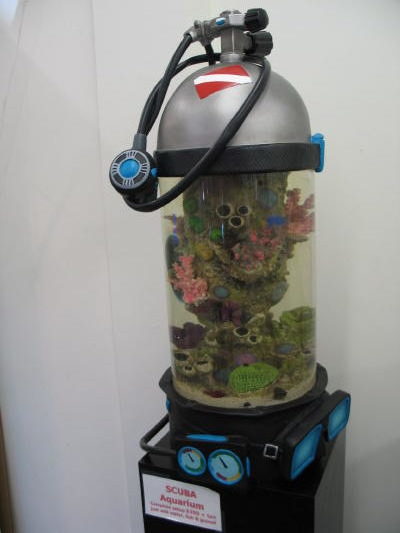 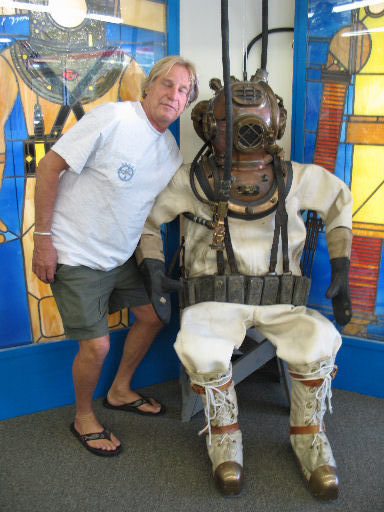 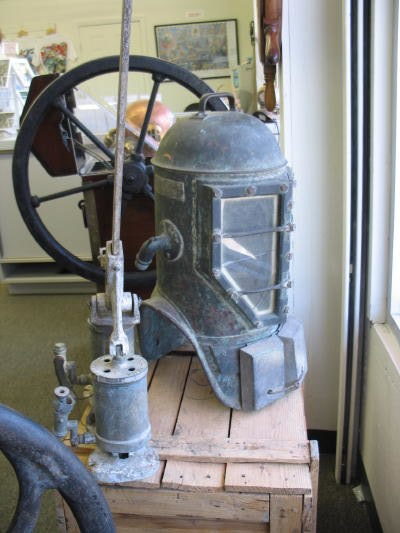 The US Navy developed a Mark V recirculating helmet. They started by modifying a Mark V mod 1 helmet. In the pictures below you see one of those early recirculating hats. You see that it features a banana exhaust on top. It had to be moved there because of the canister attached to the back. Some divers died using this hat: water leaked into the banana exhaust (when the diver is upside down for instance) and reached the extremely dangerous natron. I will explain that later. 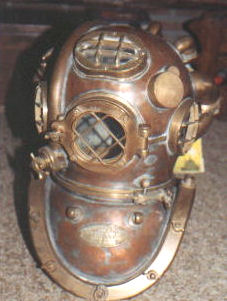 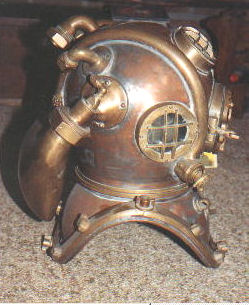 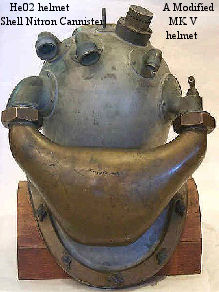 In the final design the perforated end of the banana exhaust is replaced with a second control valve. This valve looks a bit like a Chinese straw hat so it was referred to as a China Hat Model. The helmet was called the Mark V mod 4.  A  large canister was attached to the rear of the bonnet. This canister contained a carbon dioxide absorbent. Gas is supplied to the diver through a normal hose to the divers supply valve. However, the main supply valve is kept closed. Just to the side of it is a much smaller valve called a “hoke“. It is attached to one side of the absorbent canister. Look at the little valve you see in each picture below. The gas supply goes from the hoke to a jet nozzle that acts as a pump to circulate the gas through the canister where carbon dioxide is removed. The fresh gas enters the helmet on the other end for the diver to breathe. Thru the nozzle a constant flow of fresh gas ventilates the helmet. The exhaust valve is normally kept close to repeatedly reuse the gas.

Have a look at the third picture, the rear view:

Soon after initial problems like air-supply and protective suits were solved, divers began to experience some physiological difficulties after deeper dives and longer exposures. In fact they suffered from:

without knowing it. This caused terrible suffering and death in the early days of diving. For many years the causes and cures for these illnesses were unknown due to a general lack of knowledge in the physical science.

Here are some names and dates of interest:

With this knowledge around the turn of the twentieth century, it was custom to lower and raise divers very slow: only a few feet eacht minute. Even with these precautions many times problems occurred at greater depths.

John Scott Haldane did some important work in this matter. He found out that existing air pumps were not very suitable for greater depths: Due to bad ventilation of helmets carbon dioxide build up inside them causing problems for the diver. He also developed a “stage decompression” in 1905 that was accepted by the British admiralty. Haldane was the godfather of the decompression tables that we use today.

Understanding and controlling oxygen poisoning did not go that fast. Henry Fleuss invented the first oxygen rebreather in1876 but he did not have a clue that the gas could be very dangerous under pressure. Many trials in the years after that showed that oxygen could be dangerous under pressure. In WW II many secret military operations were carried out with oxygen rebreathers.

Nitrogen narcosis proved equally difficult to cure. Every diver was influenced by it in some degree. For many years no suitable solution to the problem was found.
In the early 1900’s, compressed air diving was limited to depths less than 300 feet.

In 1912, the US Navy began a continuing series of programs to expand diving technology and techniques. They experimented with gas mixtures other than air. In 1924 an experimental dive was made to 150 feet (about 50 meters) using a mixture of helium and oxygen. Substitution of helium for nitrogen in the breathing mixture produces two main effects upon the diver under pressure:

By using a mixture of helium and oxygen (called Heliox) the working depth is no longer limited. Heliox is now used to depths up to 1500 feet and more ! It is also the second lightest gas known. Absorption and dissolution out of the body tissues is much more rapid than that of nitrogen. This all means that a diver can go down deeper, stay there longer and have shorter deco-stops on coming up !

This type of diving is called mixed-gas diving.
Breathing mixtures are classified as:

The US Navy played an important role in Heliox experiments: In the US there were natural gas fields of Helium. In Europe there were none. Therefore experimenting with the gas was very very expensive for the Europeans. Practically all the efforts in this field go to the United States.

Jim Ernst and “Doc” Riojas made a 400 ft diver off Toulon France back in the early 60’s aboard the USS Skylark (ASR-20)part of Sub Squadron TEN, New London Conn. 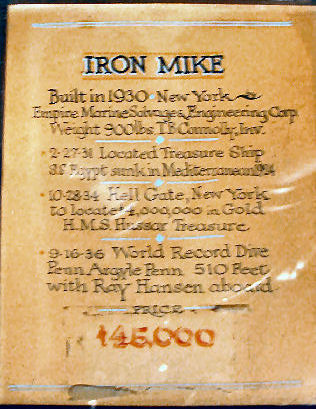 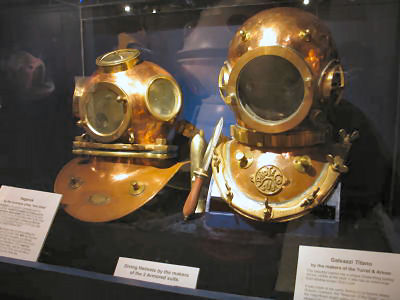 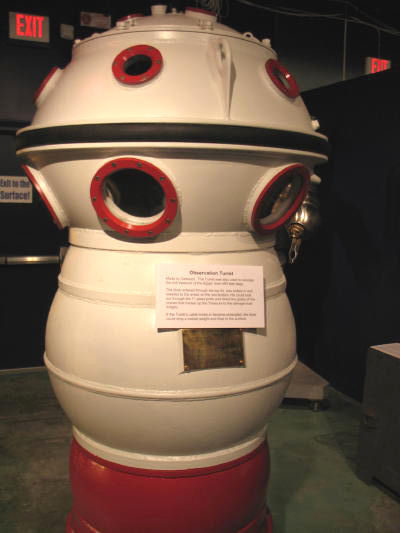 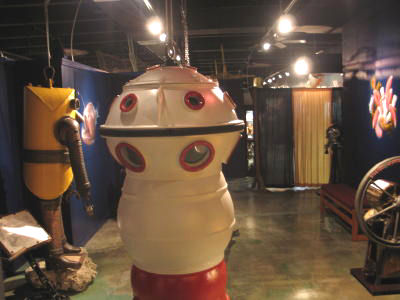 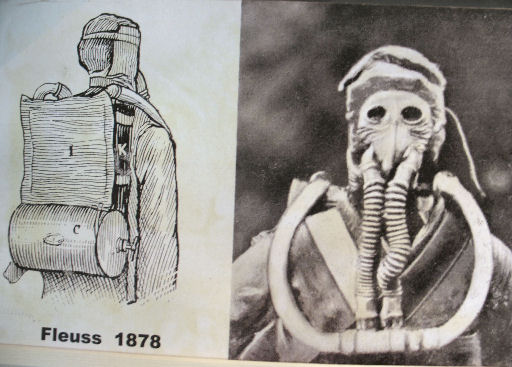 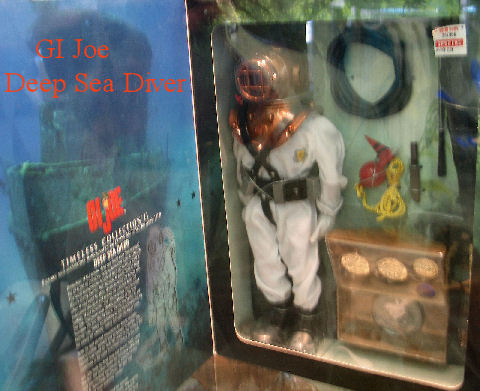 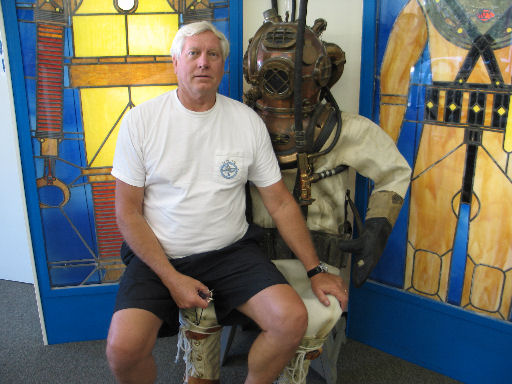 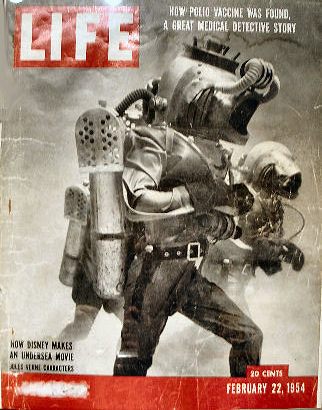 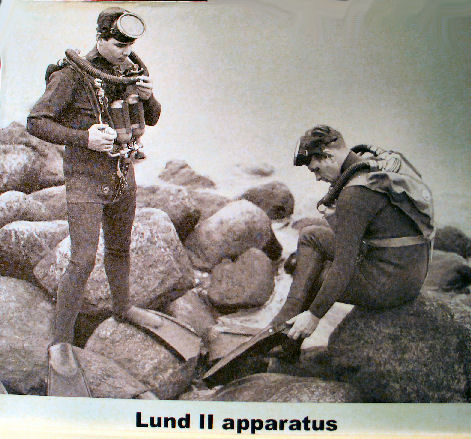 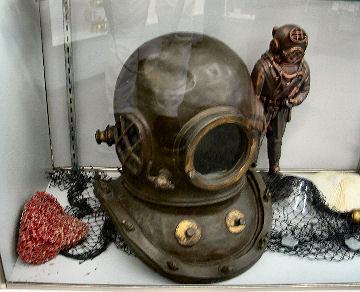 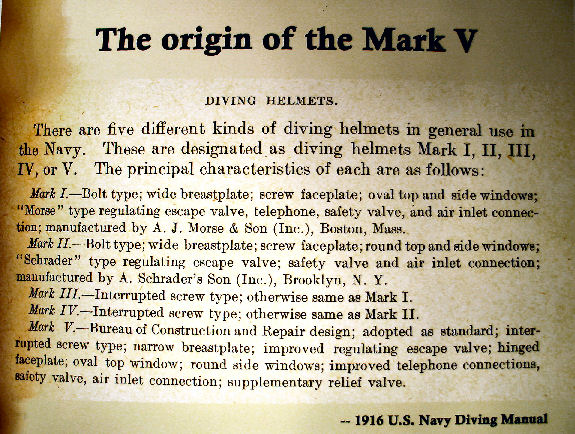 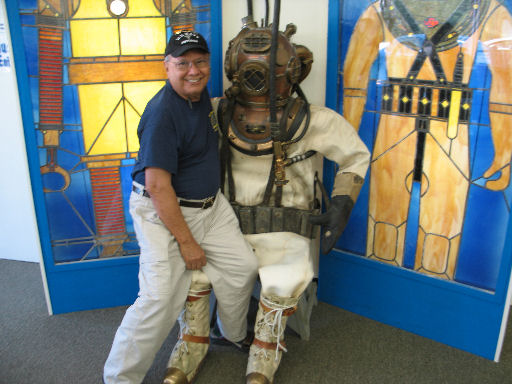 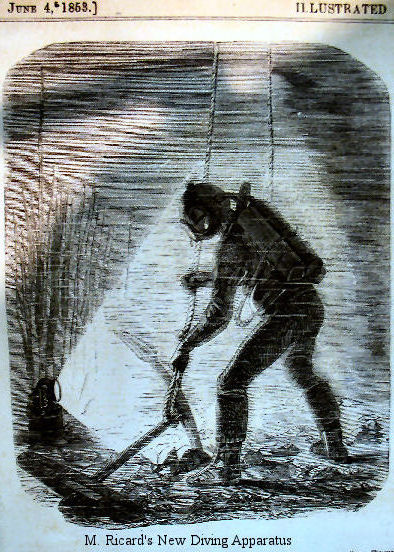 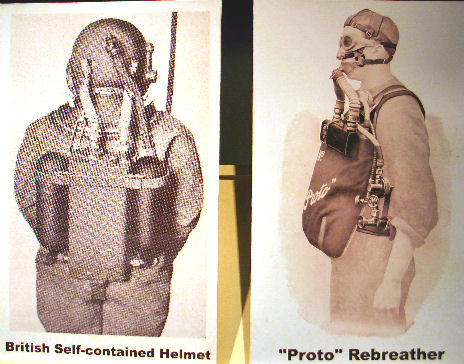 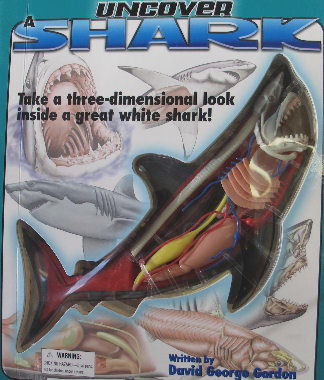 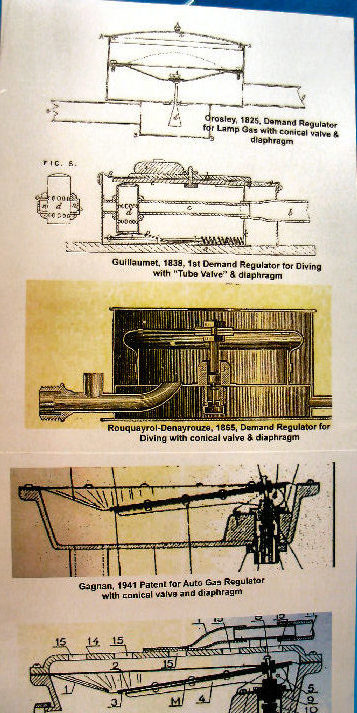