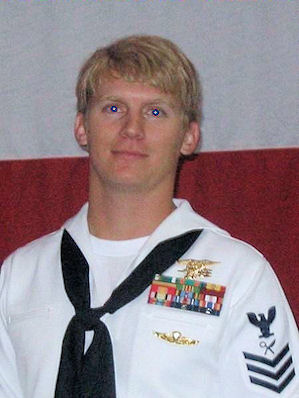 He reported to his first duty station, SEAL Team FIVE, for two years and then transferred to SEAL Team THREE for another two and a half years. On 30 March 2005, SOC Freiwald began rigorous Selection and Training for Naval Special Warfare Development Group. Nine months after beginning this process, SOC Freiwald was selected to be a Development Group Assaulter. He reported to TACDEVRON TWO on 15 December, 2005. Since being assigned to TACDEVRON TWO, he has deployed five times conducting combat operations with a Joint Task Force as Lead Breacher.

He leaves behind to cherish his memory his wife Stacey; his daughter Jasmine; parents Mr. and Mrs. Richard and Theresa Freiwald; brothers Adam, Erik, Jeremy; and countless family, friends and teammates.

A Funeral Service will be held at 12 noon Saturday, September 27, 2008, at Altmeyer Funeral Home, 5792 Greenwich Rd, Virginia Beach, VA. The family will receive friends from 10 to 12 p.m. prior to the service. A reception at the funeral home will follow the service. Burial will be at 11 a.m. Monday, September 29, 2008 in Arlington National Cemetery.

The family request that in lieu of flowers memorial donations may be made to the Jason R. Freiwald Memorial Fund at Navy Federal Credit Union.

Condolences may be offered to the family at www.altmeyer.com.