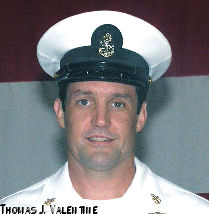 Valentine, 37, was killed from injuries obtained when he plunged to the ground during a parachute training operation at Mission Royale Golf Club in Casa Grande. Casa Grande emergency medical personnel pronounced Valentine dead at about 9:20 a.m.
Valentine enlisted in the U.S. Navy in August 1989.
Valentine began working as an East Coast-based SEAL in November 1990 and served there for the remainder of his career. He served multiple tours in Afghanistan and Iraq. Valentine is survived by his wife, two children, parents, a brother and a sister.

go to link for the rest of the story.

NORFOLK:    For the second time in less than a month, a Virginia Beach-based SEAL has died in a parachute training accident in Arizona, the Navy said Friday.

Vaccaro was pronounced dead Thursday morning at University Medical Center in Tucson. The incident occurred around 8 a.m. in Marana, Ariz.

On Feb. 13, Senior Chief Petty Officer Thomas Valentine died during a pre-deployment training jump in Casa Grande, Ariz. Valentine was a member of SEAL Team 6, based out of Dam Neck Annex in Virginia Beach.

Valentine’s body was found on a golf course about 50 miles from the training airfield in Marana. He had jumped out of a C-130 airplane.

Navy parachute training at Marana has been suspended, officials said.

“Chief Lance Vaccaro was an outstanding SEAL, a combat tested leader, and a great American,” said Rear Adm. Joseph Kernan, commander of Naval Special Warfare Command. “His tragic death reminds us of the dangers that he and his teammates embrace daily, in training or in combat, so that all Americans can continue to enjoy the benefits of freedom. On behalf of all Naval Special Warfare, I offer my deepest condolences to his family and friends. His sacrifice will not be forgotten.”

Vaccaro enlisted in the Navy on May 29, 1991, according to a Navy press release. He graduated from boot camp at Recruit Training Command, Great Lakes, Ill., in August and began his first tour of duty aboard the carrier George Washington in Norfolk.

In April 1994, he transferred to the carrier Kitty Hawk in Yokosuka, Japan, before entering Basic Underwater Demolition/SEAL training in Coronado, Calif., in July 1996. Following graduation, Vaccaro attended advanced training courses and reported to an East Coast-based SEAL Team in June 1997. He continued to serve in various East Coast-based SEAL Teams the remainder of his career.

Cmdr. Greg Geisen, a San Diego-based spokesman for Naval Special Warfare, said the investigation into Valentine’s death is almost complete, but he could not provide any details. He said that the two deaths “appear on the surface to be unrelated.”

He added: “Training safety is always a top concern, but the type of advanced training SEALs engage in is extremely challenging and has inherent risks.”

In both instances, the planes carrying the SEALs flew out of Pinal Airpark in Marana, Geisen said.

The civilian facility is used by military planes about 30 percent of the time, according its Web site.

The Web site also indicates that “extensive military parachute training” occurs at all hours from both high and low levels.

The unidentified SEAL was found in the immediate vicinity of the airfield, much closer than Valentine was, Geisen said.

SEALs are proficient parachute jumpers; many have more than 200 jumps.

Unlike Army paratroopers, SEALs typically don’t do static line jumps, in which hundreds of people swing off a line out of a low-flying airplane with their parachutes rigged to open almost immediately.

Instead, special operation troops such as SEALs often complete more difficult freefall jumps with a delayed opening of their parachutes.

According to statistics from the Naval Safety Center in Norfolk, four sailors died in parachute training between 1999 and 2001. No deaths were reported between 2002 and 2007, and two – the Arizona deaths – have occurred this year.

The Army reported one parachute training death since October 2006, according to the U.S. Army Combat Readiness/Safety Center at Fort Rucker, Ala.